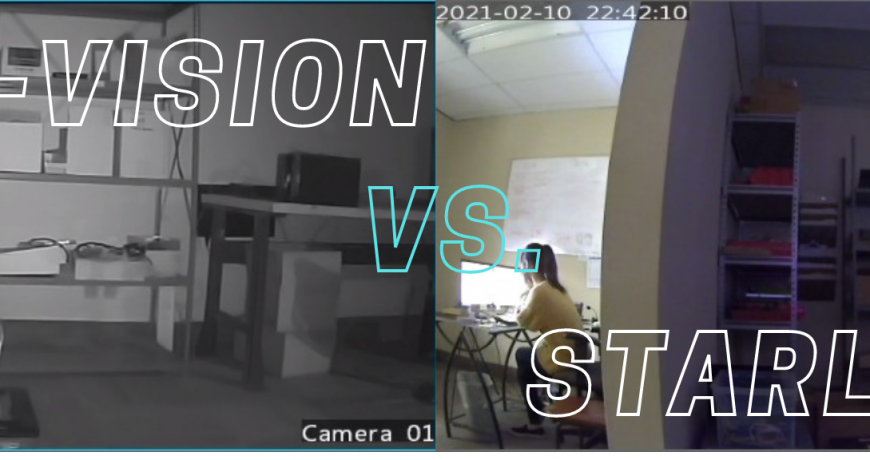 If you’ve been looking for security cameras to at nighttime, you might have heard about “starlight cameras”. If you’re not familiar with CCTV cameras, this probably sounds like some kind of high-tech jargon that requires Googling to figure out. But even after consulting with Google, it might be a little difficult to fully understand what this technology is and why it would be beneficial for you. But look no further because this post will cover everything you need to know.

What Are Starlight Cameras?

But what makes these sensors so special that they can see in absolute darkness? If you remember from a previous post that we’ve written, even night vision cameras still require some sort of light source. Starlight sensors are bigger than the CCTV sensors seen in regular security cameras. The bigger sensor also has a wider aperture and a slower shutter speed. Shutter speed is the amount of time that the camera’s shutter stays open for. A slower shutter speed means that the shutter will stay open longer which allows more light to reach the starlight sensor. This means that images captured from starlight cameras will have better color, even in low-light conditions.

Besides being in better color, starlight cameras produce clearer images than regular night vision cameras. The sensors are equipped with superior noise suppression technology. When we mention “noise” in CCTV, we are not referring to audio noise, but image noise. Reducing image noise means getting rid of all of the graininess and splotches that may appear due to poor light conditions, resulting in clear and high-quality footage.

Many people choose to use starlight cameras due to their ability to produce images in color, but they are able to be used in black & white as well. The settings can be changed manually, but the camera will always switch to the option that is best. When the lighting gets too dark, the camera will switch to black & white mode since this mode will ensure that the images are clear.

If you’re looking for a security camera to monitor in the dark, then which night vision camera should you use? Traditional night vision cameras are an outdated technology so the most popular choices starlight and infrared (IR) cameras. Compared to IR cameras, starlight cameras are a better choice because they produce images that are more clear and detailed due to their special sensors. Additionally, they can see further distances because they use the natural light in the surrounding area. IR cameras have a shorter range because they rely on their IR LEDs for light. Starlight cameras work so well that they can be used to see faces and license plate numbers in the dark. Although starlight cameras do tend to be more expensive than other night vision cameras, they are high-quality cameras that provide better monitoring.