CCTV is closely associated with other aspects of the IT world.  In fact, most of the time, it is the IT pros that are assigned with learning about, choosing, ordering, and installing the systems.  I get asked a lot about the difference between Cat5, Cat5e, and Cat6 when customers are looking to buy security camera cable for a CCTV camera system.  Cat 6 cable is better.  It is newer technology, it is faster, and 6 is higher than 5.  If they were the same price, always buy Cat 6.  The issue is that they are not the same price.  Cat 6 can be double the cost of Cat5 cable and the question here is “Is it worth it?”

Cat 5 and Cat 6 are both types of twisted pair cable.  Basically they both consist of 4 pairs of wires that are twisted around each other for the length of the cable. First let’s talk about the name.  “Cat” is short for “category” and the number after is basically the version of the standard.  With “Cat5” the “5” does not reference the amount of wires or anything else physical about the wire.  It is just the name assigned to it by the Telecommunications Industry Association.  There are physical differences between the two, but the most important difference is that Cat5 is rated for 100Mbps, Cat5e is rated for 350Mbps, and  Cat6 is rated at 1000Mbps. This difference of bandwidth is why we hear about it.  It means that Cat6 can be used to create a gigabit network.

Set Yourself up for the Future

There are no IP cameras out now that push anywhere close to 100Mbps.  Even the most expensive, highest megapixel cameras can work in a Cat5 network.  The thing to remember about new networks is that the future is coming and will be here before we know it.  For analog cameras the same coax cable pulled 15 years ago will run the current cameras being sold in the market.  For IP cameras or any product related to networking, 15 or even 10 years is a lifetime. If you are putting in a new network video recorder and a new system, it may be worth it to run a Cat6 network.  That way you will have the infrastructure in place for any systems in the future.  Also, for an install where less than a 1000 ft. of wire is used, the price difference will make up a very low percentage of the total price. 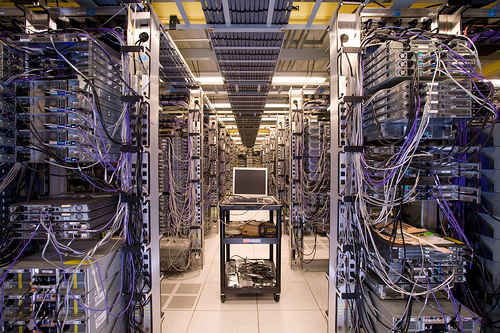 Cat5 or Cat6 vs. Siamese Cable

All of the things we have been talking about are very relevant when building a computer network, but they are not when running twisted pair to an analog CCTV camera.  Installers run Cat5 or Cat6 for analog cameras because it is cheaper than Siamese cable and the video signal can go farther (Further Reading: CCTV Power Supply Distance). The other plus side is that some newer homes and businesses already have wire run so the install is a snap.  When installing an analog camera with Cat5 or Cat6, only two of the four pair are needed.  One pair is used with a balun for video transmission and one pair is used for electricity.  Neither power nor video care about the bandwidth of this cable. The power just needs two wires; any two will do.  The video just needs two wires and any two will do.  We are not using the wires for their intended purpose. So for analog cameras there is no added benefit to using Cat6.

Whatever your application, keep these points in mind.  The debate is cost over quality and current needs versus future needs.  Technology will always change and grow and we must change with it, but more importantly we must understand it.  Otherwise we will spend a lot of money we don’t need to.