In the first part of our DVR capture card guide, we discussed the importance of choosing the card with the desired frame rate and resolution. Plus, we informed the user of some of the major abilities you get with DVR capture cards such as remote viewing and video compression. For part two of our DVR guide, we look at some more of the key features to help choose the right DVR capture card for your security needs.

You might have noticed that some DVR capture cards are described as hybrid cards. Hybrid DVR capture cards help to bridge the gap between analog CCTV and IP technology. With a hybrid capture card, you can still record with your existing analog cameras while also considering future expansion with the addition of the more powerful, higher resolution IP cameras.

This is not something that is mentioned on a lot of DVR card specs, but it is of vital importance when selecting your card. The type of card slot, PCI or PCI Express, that the capture card requires matters because if your computer does not have the correct PCI or PCI Express (PCIe) slot then the DVR card that you hope to install is useless. The PCI and PCIe slots are computer expansion connections on the motherboard for adding hardware devices to a computer. DVR capture cards generally come in one of the two types of slots. So, you need check whether the DVR card uses a PCI or PCIe slot and which slot is available on your computer. 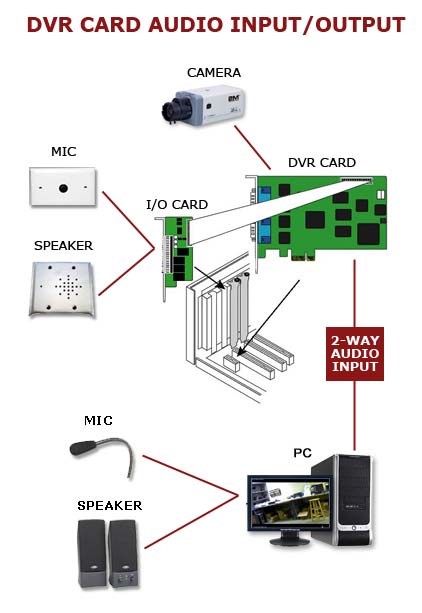 Plenty of the DVR card manufacturers allow for optional/additional audio connections to the capture card. The Audio Connection includes audio inputs to connect microphones and audio outputs for speakers. If you attach a microphone, the DVR “sees” and “hears” what occurring through your camera allowing you to record important audio as well as video. With a speaker attached, the DVR will vocalize a preset message through the speakers to scare off possible intruders. Then if the system has the two-way audio feature, you are able to communicate through a microphone from your location to the speaker connected to the security system to scare off the thief while also recording the audio. Here are some important considerations to keep in mind. 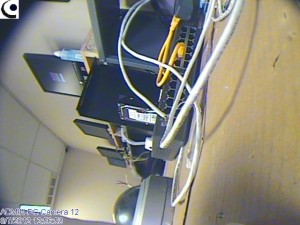 The digital watermarking feature allows for verification of the recorded video. DVR capture cards with watermarks help prove the authenticity of the video and that the recorded video has not been edited or doctored in anyway. Videos with watermarks are useful to law enforcement because the video has the proof that it was not altered or tampered with. Watermarks are invisible, and are made apparent with a watermark viewer, as shown to the right. A nice little feature that most DVR cards offer is the ability to integrate a POS text overlay device. With POS integration, the DVR system will display and record the additional text along with the video. The POS integration feature is a must for retail and businesses that uses a cash register to help circumvent internal thief. For more on POS, read our POS blog post.

Possibly the best feature available with DVR capture cards is advanced video analytics. Video analytics offers numerous functions to better break down and analyze what is happening on the recorded video. Some examples of video analytics are People Counting where the DVR system can determine the number of people in the scene. Another is Face Detection with the number of faces appearing in the picture. There are a whole plethora of analytical tools when dealing with Advanced Video Analytics that we will cover in another blog post on another date.

DVR capture cards offer a lot of features to enhance your video surveillance monitoring, ranging from email notifications to video analytics. No matter how many features that the DVR card has, remember to get one that can record at a fast enough frame rate and high enough resolution to capture the video that you require for your security needs. Check out Part One for an explanation on the major features to look for in a DVR capture card. These additional features are just a few that I think can help you narrow down the right choice for you. So happy shopping!